If you are one of the many cannabis consumers surprised to learn that live rosin and live resin aren’t the same thing, don’t sweat it. There are enough cannabis concentrate products on the market that casual consumers can be excused for not knowing all the intricacies of this growing niche. While it seems like that one letter difference between live rosin and live resin should just be excused as a typo, they are in fact two distinct products with two different manufacturing methods that are worth knowing about. Both are considered some of the highest-end cannabis concentrates that are available on dispensary shelves and are growing exponentially in popularity.

For any concentrate fan curious about that next level of quality and the key differences between live rosin and live resin, PotGuide’s got you covered.

What Does “Live” Mean When It Comes To Concentrates?

When it comes to concentrates, the term “live” refers to concentrates that have been extracted from freshly harvested plant matter. In contrast, the most common types of concentrates (such as wax and shatter) are extracted from plant material that has been dried and cured before processing. Drying and curing flower is the most common method for getting bud ready for sale, and is typically necessary to create a quality product. 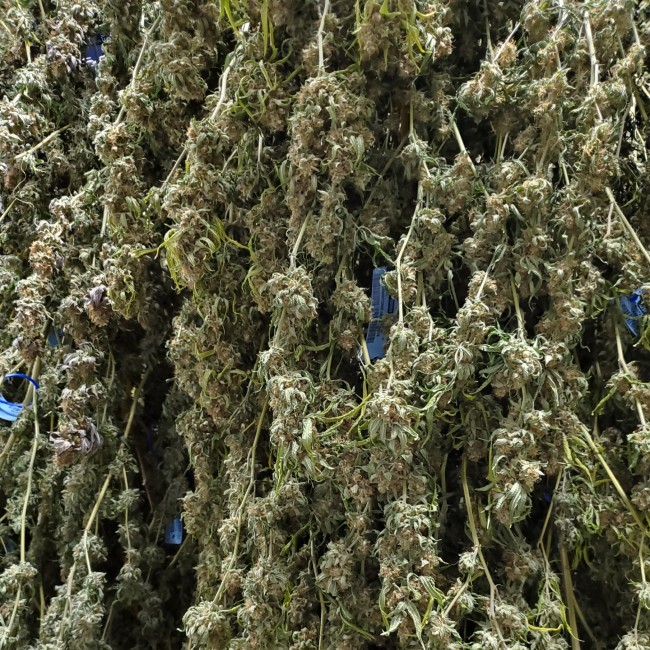 Unlike other forms of concentrates, live concentrates are not dried and cured before processing.

After bud is trimmed, it’s laid out to dry for a week or two. This removes a lot of the moisture while locking in terpenes. The bud is then cured for another two to eight weeks before it is ready to be distributed and sold. Properly dried and cured bud will have a low moisture level that both preserves it and allows it to burn smoothly. It will also have a strong, aromatic taste thanks to the chlorophyll being broken down in the curing process. (Improperly cured bud is harsher, weaker, and smells like hay due to the excess chlorophyll.)

While this makes the bud ready for sale, the drying and curing process causes the flowers to lose some of their terpenes as the moisture is extracted. Since the bud or the concentrate extracted from it is still flavorful and potent, most consumers don’t notice anything missing.

However, by extracting concentrate from fresh plant matter through “live” extraction, all the plant’s terpenes are preserved in the end product. This results in a high-quality concentrate that is much more flavorful, and arguably stronger due to the entourage effect.

What is Live Resin?

Shatter and wax are two of the most common forms of concentrates and are extracted using a hydrocarbon-based solvent like butane. The Butane Hash Oil (BHO) method extracts cannabis concentrate by blasting ground-up plant matter with the solvent under high pressure. The resulting sticky brown or yellow liquid – containing all the plant’s resins and terpenes – is then dried and processed into a gooey amber-colored concentrate. The solvent is then removed from the final product using a process like closed-loop extraction, which separates and recycles the solvent using a vacuum pump. This is all done without exposing the product or solvents to the air. The process has traditionally been applied to cured or dried plant matter, from many parts of the plant. 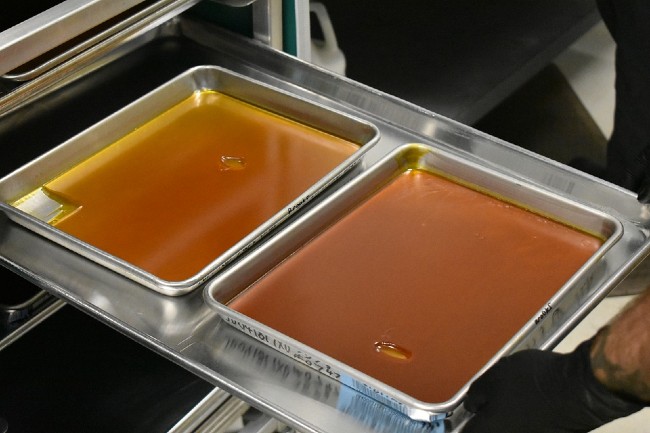 Live resin is extracted similarly to shatter and wax, with both using the BHO method and Closed Loop Extraction.

The resulting product still has that warm amber shade, but it also has a rougher texture, with THC crystals mixed in with the liquid terpenes. The other difference will be the smell, which is far more potent than regular concentrates. This (and the price point) is what has earned live resin its name as the “Champagne of Concentrates.”

What is Live Rosin?

Rosin is one of the newest techniques for extracting cannabinoids and terpenes into concentrate without involving hydrocarbon extraction. Rosin extraction doesn’t use any solvents or chemicals in the process. Instead, rosin is extracted from plant matter using a combination of heat and pressure. By using this method, producers can instantaneously extract a potent resinous sap from their dried plant matter, hash, or kief. This thick, gooey, full-melt hash oil extrudes from the plant matter without requiring any additional cleaning or removal of chemicals, which makes it the best choice for health-conscious consumers. This cannabinoid and terpene-rich, full-melt hash oil boasts a high THC percentage as well as a robust flavor profile (as long as it was extracted from plant matter). Rosin has earned a large following in the cannabis community because it is chemical-free and full spectrum.

Due to the heat and pressure involved in its production, Live Rosin cannot be extracted from flash-frozen plant matter like Live Resin is. The extra moisture in the plant matter would boil up alongside the cannabinoids and terpenes, ruining the final product.

Instead, live rosin producers must take the artisan step of manufacturing full melt bubble hash (also known as ice water hash). To create bubble hash, the freshly frozen plant matter is agitated in a bath of water and ice, which shakes the frozen trichomes off the plant and into the water. These trichomes are then filtered through a series of finer and finer mesh bags to sift out any remaining plant material. Without filtering, this plant material will burn rather than melt during the extraction process, ruining the final product. Once the trichomes are collected, they’re dried into full-melt bubble hash using a freeze dryer.

Once processed, the bubble hash is then pressed into live rosin via a rosin press using low heat and pressure. The final product is even more flavorful and pure than regular rosin, without any loss of terpenes. Because of this purity, live rosin ranges from yellow to off-white as opposed to regular rosin’s amber color.

However, because both start with fresh plant matter, they are some of the most high-end, flavorful, and enjoyable concentrates available on the market. While they have a higher price point that wax, shatter, and distillate, sometimes it’s worth splurging so that you can treat yourself for a night. If you find yourself with some extra money and a special occasion coming up, or you’re just curious about what makes a cannabis product top-shelf, give it a try.

Have you tried live rosin or live resin before? Which did you prefer? Share your thoughts and experiences in the comments below.