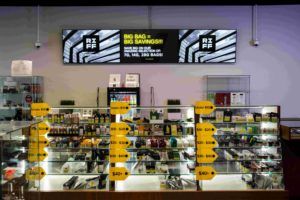 The interior of an already-converted Value Buds store in Edmonton, Alberta. (Photo courtesy of Alcanna)

Canadian marijuana retailer Nova Cannabis will bet heavily on a value strategy after combining with a competitor, signaling the continuing importance of low-priced products in the increasingly competitive Canadian adult-use market.

After the deal closes in early March, most of Nova’s 53 retail locations will be converted to the Value Buds brand.

“Every element has to line up for this model to work,” Karasiuk said.

The business combination is part of a wave of mergers and acquisitions among Canadian cannabis retailers.

Under the deal, Alberta-based Alcanna – a major Canadian alcohol retailer – will spin off its 34 marijuana stores and combine them with competing retailer YSS by way of a reverse takeover that values the new company at 130 million Canadian dollars (roughly $103 million).

The resulting retailer will be called Nova Cannabis, the name of most of Alcanna’s current cannabis stores. Alcanna will be Nova’s majority shareholder, backing it with a CA$10 million line of credit.

An upsized private placement that closed this week raised CA$40 million for the new company.

Alberta-based Nova will become Canada’s third-largest private-sector marijuana retailer by number of corporate-owned stores, owning all but one of its 53 initial locations.

Eighty percent of Nova’s stores, or roughly 40 locations, will be converted to Value Buds.

Some stores have already been converted: Alcanna started experimenting with the concept of a discount marijuana retail brand at four Alberta locations last year, said Karasiuk, a former executive at Canadian producers MedReleaf and Aurora and current Alcanna board member.

The original concept was called “Deep Discount Cannabis,” and Karasiuk said the store conversions resulted in average sales increases of 250% within two months.

“Value is not the same as discount. It’s that gap between price paid and the benefit received,” Karasiuk said.

“And we do intend, and we are selling, higher-end cannabis products – just at a lower price point than the competition.”

Those consumers are very value-conscious, he said.

The plan to win over those consumers involves lessons from Alcanna’s forays in the discount liquor space in Alberta.

“Because (Alcanna) had a really strong balance sheet, it had the ability to drop its gross margins, drop its prices to help capture more share,” Karasiuk said.

“It rolled up with another player in the value segment in liquor and very quickly started capturing a huge amount of share in Alberta.”

Karasiuk said Value Buds stores are designed for high-transaction volume, relying on bold, yellow-on-black signage to help get customers in the door.

Inside, shoppers are presented with large boards listing available flower options and prices.

That method of displaying products “might sound simple,” Karasiuk acknowledged, “but very few retailers are actually doing it.”

“We want to make it very simple for a consumer to walk in, see what’s available to them and then walk to a point of sale.”

“But again, the consumer that we’re really focusing this on, for the most part, is already a well-educated consumer and needs less of that than you might find in some other environments.”

Karasiuk said Value Buds aims to offer products for about 20% less than the competition.

“It’s important for us to have products that are priced in the marketplace, so that we will continue to bring consumers from the unregulated to the regulated market,” he said.

“I keep a close eye on what the unregulated products are, and we’re already competitive, if not lower, than a lot of those prices that are in fact out there.”

Beating competitors on price relies on a number of competitive advantages, Karasiuk said.

Nova will initially use Alcanna’s back office for a fee that he said is significantly less than it would cost to build those tools from scratch.

“We can lever everything from payroll to legal to finance, real estate, lease negotiations – all of those things that a multiunit operator needs to succeed,” Karasiuk said. “We already have them.”

Value Buds will also benefit from Alcanna’s experience in designing and building out low-cost stores, he said, as well as the liquor retailer’s existing relationships with Canadian landlords that allow it to negotiate favorable leases.

“A lot of others that were perhaps without that backing, perhaps independents or small groups, they don’t have and never had the ability to get into leases that would afford them the ability to compete in these sort of price ranges to that value customer,” Karasiuk said.

At launch, 51 of Nova’s 53 stores will be in the crowded Alberta market, plus one store each in Saskatchewan and Ontario.

But Karasiuk said the company has “really robust organic and M&A growth plans in mind, particularly for Ontario.”

The CEO-designate believes it might be hard for some of Nova’s competitors to follow the company down the value path.

“They’re going for more-educational, experiential (stores in) high-end neighborhoods and the like, and that’s great,” Karasiuk said.

“If they’re going to stick to those strategies, then I don’t see why they would want to be coming towards the value end. … But the other part is, I’m not sure the degree to which they can.”

Solomon Israel can be reached at [email protected]